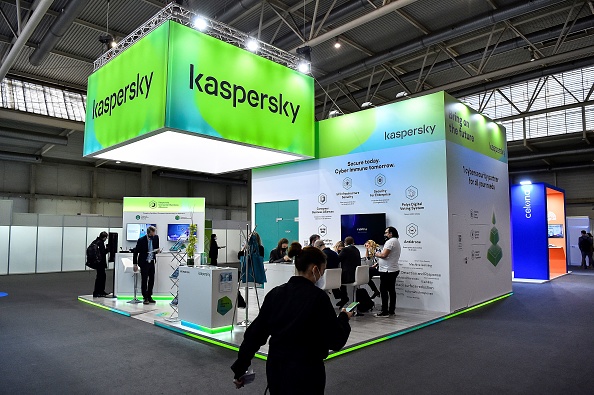 The US FCC has said Kaspersky poses an “unacceptable” security risk, making it the first Russian company to be added to the list of national threat risks.

(Photo: PAU BARRENA/AFP via Getty Images)
Visitors sit at the stand of Russian antivirus software development company Kaspersky Lab on the opening day of the MWC (Mobile World Congress) in Barcelona on February 28, 2022. – Organizers hoped to return to a large-scale event after two years of disruption caused by the coronavirus pandemic, but they were forced to remove the pavilion dedicated to Russia after the invasion. However, some Russian companies were still participating in the event

According to a report by Bloomberg, the United States Federal Communication Commission has included AO Kaspersky Lab in the list of companies threatening national security.

The outlet noted that Kaspersky is the very first Russian company on the list, which was mostly dominated by China-based companies. Some of the notable companies on the list are Chinese tech giants, namely Huawei and ZTE.

It should be noted that the FCC also added two new Chinese companies to the list of threats, namely China Telecom and China Mobile International.

FCC Chairman Jessica Rosen Worcel said her move to add the Russian cybersecurity firm, along with Chinese telecommunications companies, was part of bolstering “US communications networks against national security threats.” .

On top of that, according to a recent Reuters report, FCC Commissioner Brendan Carr said in a statement that the inclusion of Kaspersky “will help secure our networks against threats posed by Chinese and Russian entities backed by the state”.

The FCC commissioner added that these “state-backed” companies from China and Russia could engage in espionage, which, in turn, could harm the security of the United States.

But it should be noted that the FCC announcement did not mention the ongoing conflict between Russia and Ukraine.

The decision to list Kaspersky didn’t even cite recent statements by US President Joe Biden saying there are potential Russian cyberattacks as the country imposed sanctions in favor of Ukraine.

On the other hand, Russian cybersecurity company Kaspersky let out its disappointment with the latest FCC ruling.

Kaspersky said in a statement that the Commission’s recent decision was “made for political reasons” and the current geopolitical situation. The company claimed that it also does not rely on the evaluation of its services and products.

This article belongs to Tech Times

ⓒ 2021 TECHTIMES.com All rights reserved. Do not reproduce without permission.