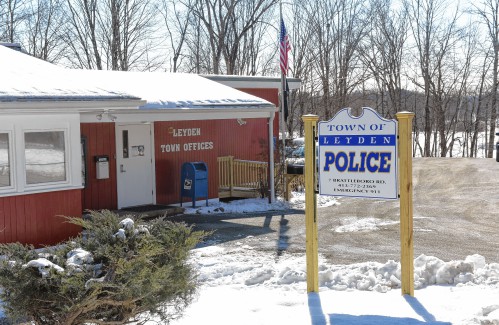 LEYDEN – Despite a “peaceful protest” of opposition at Monday night’s meeting, the Selectboard voted to endorse retired police captain Gilda Galvis as a consultant to the police department for training officers in software and paperwork so residents’ Firearms Identification (FID) cards can be issued beginning in February.

Galvis, who continues to serve as city clerk, will work for a rate of $100 an hour for up to eight hours, as decided by the selection committee Monday evening.

“I wouldn’t want a card to come out and expire knowing there are guns in the house,” selection committee chairman Jeffrey Neipp said. “We are doing a disservice to the people of the city. In this way, we will move forward and start issuing FID cards to residents who need them. »

Galvis said it would only take a few nights in February to complete the training.

There was some concern and clarification sought on the level of access Galvis will have to private information. Galvis said that while she won’t have access to the Criminal Justice Information System (CJIS), the software used by local, state and federal law enforcement agencies to track private and sensitive data, she can guide the officer in charge Mike Aiken through the steps on how to use it.

“He will have a nomination,” Galvis explained. “All it’s about is their name and address, date of birth…but when it comes to private information…(Aiken) knows how to do background checks.”

Erica Jensen, a member of the selection committee, noted that she spoke “a long time” with the CJIS information officer, who she said was comfortable with a former retired officer “helping with the basis”.

“He understood that personal information would be shared,” Jensen said, adding that she would not choose to move forward with the approval without assurances from CJIS.

“I understand that there are exceptional FIDs out there,” Jensen said. “And it would be great to move forward on something.”

The motion asking Galvis to serve as a consultant to the police department was unanimously approved, but not before a brief uproar in the meeting room in response to a woman sitting against the wall holding signs opposing the the nomination. One of the signs announced that she was organizing a “peaceful demonstration”.

In a Tuesday afternoon phone call, resident Ann Zaveruha – who was unable to attend the meeting due to the lack of an option to attend remotely – said she thought he was “outrageous” for the Selectboard to endorse having Galvis as a consultant.

“They line the pockets of the Galvis more,” Zaveruha said.

In October, Galvis and her husband, then police chief Dan Galvis, announced their immediate intention to retire. The notification came days after an Oct. 25 meeting in which the selection committee shared the results of an Oct. 18 executive session meeting with Dan Galvis to review racist, misogynistic and xenophobic content in emails. emails he shared with other city employees and officers between 2015 and 2016.