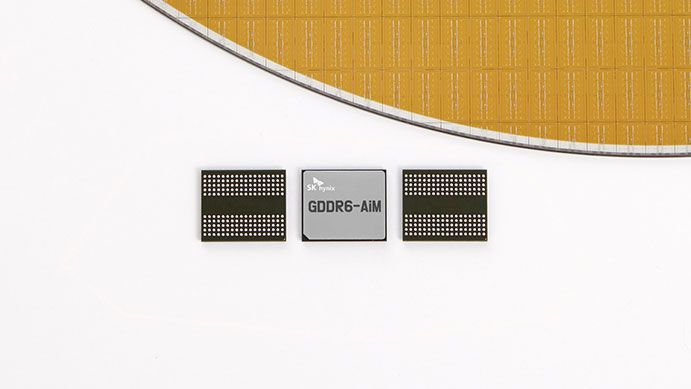 SK hynix has just released an innovation it calls PIM (Processing In Memory). Its first application of PIM is called GDDR6-AiM (Accelerator in Memory) and is being prepared for presentation and demonstration at the world’s most prestigious semiconductor conference, ISSCC 2022, in San Francisco, at the end of this month. According to preliminary tests by SK hynix, GDDR6-AiM can speed up AI processing by up to 16 times and reduce power consumption by 80%.

Bottlenecks are a major problem in the computing world and one solution that is gaining traction is a technology known as in-memory computing. Systems applying this type of unified processor/memory architecture can process data faster than ever before because it minimizes the back and forth of data between the discrete processor (whether it is a CPU or a GPU) and RAM components, while saving power.

SK hynix has some interesting claims about its new GDDR6-AiM. The most impressive claims relate to its performance. For example, the South Korean chipmaker claims that “a combination of GDDR6-AiM with CPU or GPU instead of typical DRAM makes certain computing speeds 16 times faster.” This first PIM product will target machine learning, high performance computing, and big data storage and computing applications. One of the first applications to adopt GDDR6-AiM is for AI processing acceleration, using chips developed in conjunction with SAPEON Inc, which recently spun off from SK Telecom (Korea national telecom from South).

The potential benefits don’t stop with performance. Remarkably, SK hynix is ​​said to have developed GDDR6-AiM which operates at 1.25V, lower than existing GDDR5 modules (1.35V). With this improvement and reduced data movement between memory and CPU or GPU, SK hynix claims that power consumption savings of up to 80% can be achieved.

After reading the above information, one naturally has to wonder if the SK hynix PIM technology will trickle down to consumer devices such as PCs, laptops, tablets and smartphones. If the technology is proving successful in the high-performance computing industry segments initially targeted, we see no reason why it won’t eventually make its way to consumer devices.

Of course, SK hynix isn’t the only company working on in-memory computing technology. Local rival Samsung made headlines a month ago when its researchers revealed an MRAM-based in-memory computing device. The use of MRAM brings interesting technical qualities, mainly its non-volatile nature and the potential large-scale savings if/when it reaches mass production.