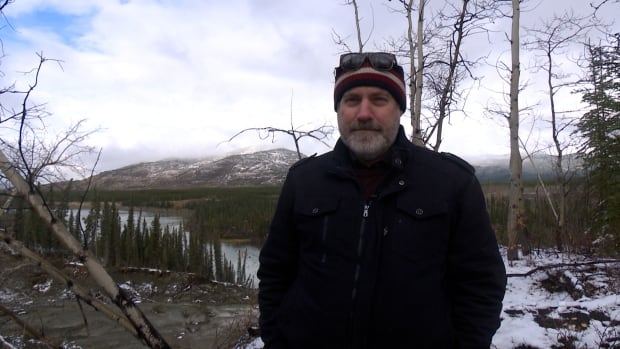 A metal rod stands at kilometer 1,456 on the Alaska Highway, as land near the highway continues to slowly collapse due to thawing permafrost.

This is the first feature of a new alarm system that will alert the Yukon Department of Highways and Public Works when the road is threatened by further destruction from the thaw.

“It’s very disturbing to have this type of process, the teardown, so close to the highway corridor,” Dr. Fabrice Calmels, chair of geoscience research at the YukonU Research Center, told CBC News.

The team’s data could potentially be used to help develop solutions to address the damage caused by the thaw, he said.

Permafrost is any ground that is completely frozen for at least two consecutive years. In the Yukon, this means there is a thick layer of ice below the surface of the ground.

At this place 30 kilometers north of Whitehorse, known as Takhini Slump to Calmels and his team, the permafrost is melting at a faster rate than ever. The ground seems to be crumbling in places, some trees have collapsed or overturned.

Calmels and his researchers first came to this site two years ago to begin their research. At that time, the slump was 95 meters from the road. Now it’s 40 meters.

Record high temperatures in the Yukon this summer, caused by a heat dome over the Pacific Northwest, have accelerated the thaw of the permafrost. This means the collapse has moved closer to five meters from the road in just a month, Calmels said.

At this rate, the crisis will hit the highway in the next three to four years, he said.

Cyrielle Laurent, Geographic Information Systems Technician at the YukonU Research Center and team member, said Yukoners should know that thawing permafrost could have major impacts on their daily lives.

â€œThis road is the only access we have to Alaska,â€ she said. “So if this fails, some people will not have access to their homes, in Whitehorse, to the hospital.”

How the alarm system works

In order to set up the alarm system, the research team drilled holes in the ground and then installed sensors that measure humidity, temperature and other important factors every hour.

A computer analyzes the data. If he notices a threat to the road, whether imminent or one that could arise from an extreme weather event, he will alert the Government of Yukon.

The Takhini Sinking Warning System is one of the first to be implemented in Canada, with a few other sites in operation in northern Quebec. Eventually, the system will also be implemented along the Dempster Highway in the Yukon and Northwest Territories.

â€œIt affects many sites in northern Canada,â€ Calmels said. “When you’re in very remote areas, you can’t monitor all of these sites, so you need to have a system that can record specific dataâ€¦ that can be analyzed remotely.”

Calmels said they had not yet found a solution to slow the movement of the Takhini Slump.

The research team still has a few touches to make to the system before it becomes fully operational, Calmels said, but that should be completed before the end of the year.