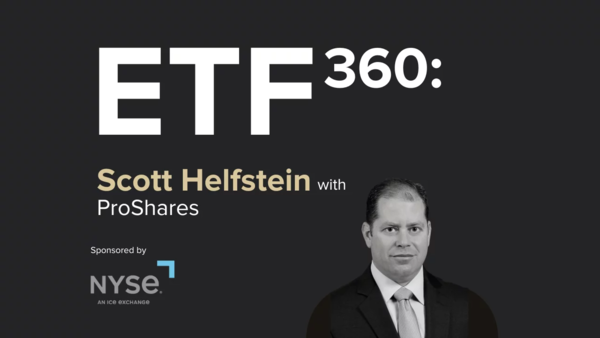 For this episode of “ETF 360,” VettaFi Head of Research Todd Rosenbluth spoke with Scott Helfstein, Executive Director of Thematic Investing at ProShares, about investing in infrastructure in a rate environment. rising interest.

The last time the United States experienced significant inflation was in the late 1970s and early 1980s, and it was during this period that Warren Buffett, President and CEO of Berkshire Hathaway, said the companies that would do well in inflationary environments were the ones that set the prices. ProShares believes that infrastructure companies are those types of companies that drive prices in today’s environment.

Over the past two decades, when inflation averaged 2.25%, infrastructure owners and operators outperformed the S&P 500 and the MSCI around 100 basis points per month. That equates to a 10% annual differential, Helfstein said.

“Throughout the period since the financial crisis when investors have been chasing yield, infrastructure since 2014 has provided returns that outperform the 10-year Treasury and the S&P 500,” Helfstein explained.

Infrastructure yields have hovered around 4% for the past eight years.

Investing in infrastructure owners and operators

In a challenging global macroeconomic environment where supply chains have been impacted by the war in Ukraine as well as China’s lockdowns related to covid-19, there was a real impact on the gross margins of many companies. Producer price increases are at their highest level in 70 years relative to consumer prices, reflecting the strong impact of inflation on consumers and producers.

“Infrastructure companies, owners and operators – and again, this dates back to 2014 – have had less volatility in their margins than the S&P 500, the S&P energy sector, as well as the MSCI Global Index,” Helfstein explained.

The ProShares DJ Brookfield Global Infrastructure ETFs (TOLZ ) takes a unique approach in that it does not focus on the early cyclical components of infrastructure, such as materials and heavy machinery, but rather on the owners and operators who own the energy pipelines, transmission lines, water services and communication networks.

“When we talk about infrastructure spending, while the pick and ax group may be the first to be rewarded, what you’re ultimately doing is adding capacity to owners and operators so that they can provide more of these essential services in the future,” said Helfstein.