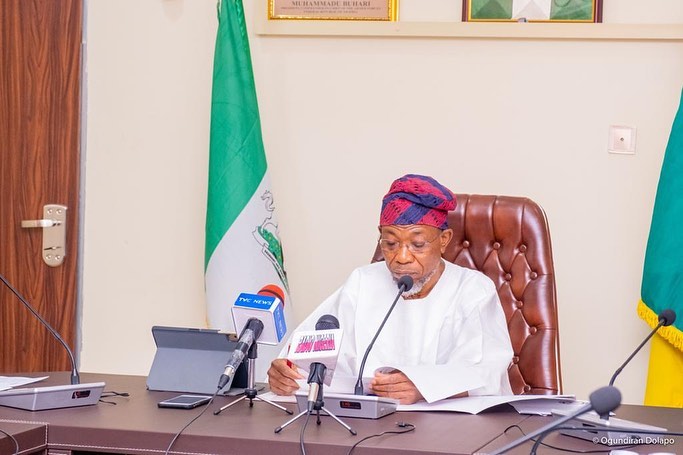 Nigeria to complete digitization of passport processing by December – Official

The minister of the Interior, Rauf Aregbesolasaid the full digitization of Nigerian passport processes would be completed by December.
Mr. Aregbesola revealed this when he was featured at the News Agency of Nigeria (NAN) forum in Abuja.

He said full digitization would completely eliminate any form of contact between passport applicants and immigration officers.

According to him, this will eliminate the corruption inherent in the system.

The minister said the project was one of the priorities of President Muhammadu Buhari’s administration.

“We are there and by December we will eliminate all manual processing of passports.

“Now we still have manual parts, because the files are still opened manually.

According to him, there is no shortage of passport books in the country and he advised applicants to start processing their passports at least six months before the intended time of travel.

“If you need a passport now, start the process early, don’t start processing efforts two weeks before your trip.

“If you don’t, you have already created problems for yourself, because the system, after the capture, which is the registration of your data, we harmonize it with the database of the National Commission for the Management of the identity (NIMC),” he said.

Aregbesola also urged passport applicants to ensure that their names and other details match their details in the national identity database.

“Each identity document should be the same to facilitate capture,” he said, adding that even mismatches in names could create delays in passport processing.

“You have to understand what it is. It is a presidential order that the new passport system should be such that all data, everything relating to you as an individual must be identical and harmonized.

“What you have in the passport, which is the most secure identity document, should be the same for every other aspect of you, whether it’s in the bank or in the national identity database.

“When you come to us to register, after filling out your online form, you come for data entry, and what you are doing there is harmonizing what you have filed in your form and your bio-data as we move forward.

“So when your name doesn’t match what we have, your data information is not the same on the relevant platforms, we will have problems with passport processing,” he said.

He said this was necessary to stop corruption in the system.

He said Nigerians must resolve to send touts, scam artists and unscrupulous immigration agents out of business.

“An illegitimate commercial company had been created around the passport.

“It requires the commitment, dedication and participation of Nigerians to weed out and get rid of these illegitimate businesses,” he said.

The Minister said that as long as Nigerians want a shortcut to passport processing, problems will continue to arise in the issuance process.

According to him, those who frequent touts and unscrupulous passport officials face the most challenges in the process.

He therefore said that passport applicants should follow due process and help root out corruption and instill integrity in passport administration.

“Please avoid any recourse to get the passport through third party, canvasser or scammers, by starting the process early.

“If I’m going to recommend, I’ll say start, unless it’s an emergency, start treatment six months before expiration or renewal or get a new one.

“If you start six months in advance, there will be no problem. And why is six months recommended by me? Because that’s the minimum period you can even process any visa,” he said.

Mr Aregbesola said that within six months, no matter how reckless the human factor involved, there would be no concerns.

The minister called on the media and the public to help reduce the threat and encourage passport applicants to do the right thing at all times.

Of Nigeria’s many national challenges, which do you think the next president should focus on first?

Support the integrity and credibility journalism of PREMIUM TIMES

Good journalism costs a lot of money. Yet only good journalism can guarantee the possibility of a good society, an accountable democracy and a transparent government.

For free and continued access to the best investigative journalism in the country, we ask that you consider providing modest support to this noble endeavour.

By contributing to PREMIUM TIMES, you help sustain relevant journalism and keep it free and accessible to everyone.

Michigan is home to tiny jellyfish, but humans aren’t in danger