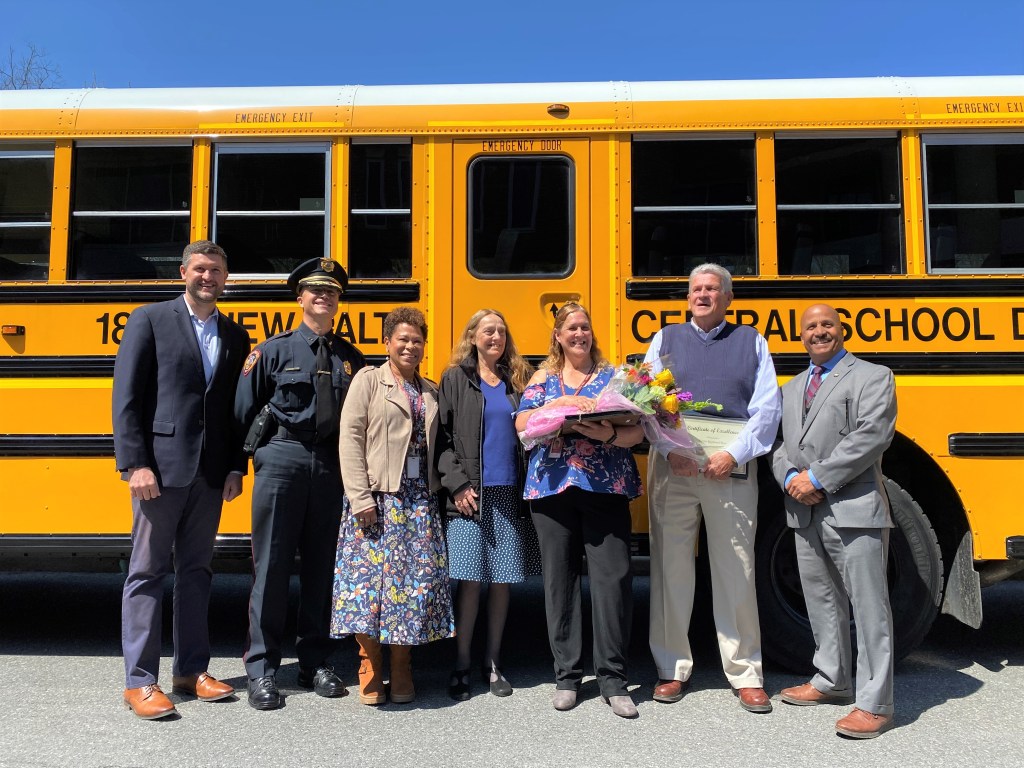 The Ulster County School Bus Driver of the Year award was presented to Lisa Haynes of New Paltz Central School District and second prize to Kevin Ross of Kingston City School District at a ceremony on Thursday April 28 at the Ulster Rotunda of the County Law Enforcement Centre.

The annual award recognizes drivers with outstanding service and safety records and is awarded in conjunction with the Ulster County Road Safety Board and Operation Safe Stop.

Haynes has 32 years of experience riding K-2, 6-12 and special needs racing. She is known for working with students in a gentle and reassuring way to ensure a safe ride, often traveling 90 minutes each way. Haynes was nominated by New Paltz Central School District Transportation Director Maureen Ryan and received an Arthur Mulligan Award and a gift certificate for Savona’s Trattoria.

Ross has 13 years of driving experience for the Kingston City School District. He received glowing letters of recommendation and support from his colleagues at J. Watson Bailey Middle School. Ross was nominated by Denise Wiley of Ethan Allen Transportation and received an honorable mention for outstanding bus driving performance.

Marchi received his doctorate in information science with a specialization in decision support systems from CEHC in 1999. Since July 2016, Marchi has been a commissioner of the OCIS. During his career, he has been a programmer, systems analyst, certified project management professional (PMP) and has held management positions in several private sector companies. A US Army veteran, Marchi was a military first responder during the World Trade Center terrorist attack and was later deployed to Iraq where he was awarded the Bronze Star Medal. He is currently a Colonel in the New York Guard.

Ann Mathis from Kingston, NY has been named Adoptive Parent of the Year 2022 by KidsPeace in New York.

Mathis was selected by the New York State leadership of KidsPeace Foster Care after being nominated by Marrinia Catuzza, a family resource specialist at the organization’s foster homes office in Kingston. In her nomination, Catuzza noted that Mathis had been an adoptive parent with KidsPeace for 15 years and called her a “natural healer” for her ability to make adoptive children feel loved and comfortable with her care.

Edward Murray, founder of NDP EMS, will continue in his role as CEO.

Browne, until recently was Director of Operations at NDP EMS. The Eagle Scout graduated from Rhinebeck High School and Hudson Valley Community College before beginning his career with the company in 1996.

Christensen, was previously Commercial Director at NDP EMS. Christensen graduated from Hudson High School in Columbia County and earned a bachelor’s degree in nursing from Russell Sage College before starting at NDP EMS in 2000.

HOW TO SUBMIT NEWS “ON THE MOVE”: “On the Move” recognizes the professional achievements of local people. Submissions can be emailed with JPEG photos attached to [email protected] Be brief, state where the subject will be based, where they live (city, town, or village) and the name and phone number of a contact person.