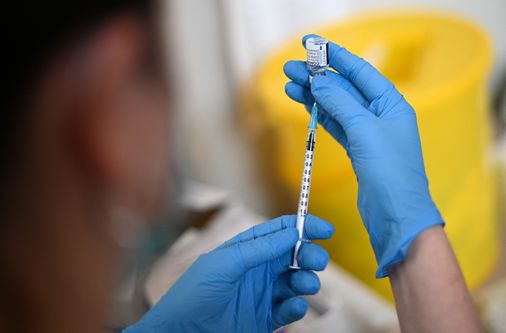 â€œA lot of people have forgotten what they learned in science in high school or college,â€ she said.

One of the most important – albeit least discussed – challenges of the pandemic has been effective public health communication. Giving people too little information and risking anti-vaccine forces rushing to fill the information void with lies. On the other hand, too much information without the necessary context can also create confusion.

“Communications are still the forgotten cousin of public health,” said Angus Thomson, a social scientist at the United Nations Children’s Fund who studies the demand for vaccines. â€œWe’re just not investing in it at all. “

In general, public health entities have not focused much on education on topics such as vaccine side effects or efficacy rates. The result of this lack of investment is an information vacuum that may unintentionally provide an opportunity for anti-vaccine narratives to take hold.

Take the Vaccine Adverse Event Reporting System, or VAERS, a government-run clearinghouse for potential vaccine issues that has become a hot topic of discussion among anti-vaccine groups.

VAERS is a crucial surveillance system that helps both the Centers for Disease Control and Prevention and the Food and Drug Administration spot vaccine-related problems early on. The deployment of the Johnson & Johnson Covid shot was halted, for example, after just six cases of blood clots were reported to VAERS out of nearly 7 million doses administered.

To access the database, you must first agree to have read a long list of disclaimers: anyone can report an adverse reaction, and it has not been checked or verified. In fact, vaccine suppliers are encouraged to report any health problems that arise after vaccination in the database, whether or not it seems likely that the vaccine is the cause.

The existence of VAERS is little discussed by leading figures in public health. If you are already familiar with the database, you may have learned it through anti-vaccine propaganda, which falsely asserts it as evidence that vaccines have harmful effects.

On Facebook, videos of people reading lists of reported side effects have gone viral. Children’s Health Defense, an organization led by Robert F. Kennedy Jr., one of the internet’s most influential anti-vaccines, regularly touts VAERS statistics in its daily newsletter and encourages its readers to report their own side effects.

It doesn’t take much to twist the facts out of context. Children’s Health Advocacy typically cites accurate statistics from the VAERS database in misleading newsletter headlines. But headlines often omit or distort context, touting the numbers as evidence of harmful vaccine side effects when they are not.

The statistic on the number of deaths in the VAERS, for example, also does not state that a person who died after vaccination does not mean that the vaccine actually caused their death. (It is also suspected that anti-vaccine campaigners have intentionally inflated the number of reports in the database.)

Transparent communication is particularly essential to gain the trust of people who are skeptical or hesitant about vaccines. And trust, much more than facts, is essential to change mentalities.

â€œWe could do a lot better with transparency around vaccines,â€ says Christopher Martin, professor at West Virginia University School of Public Health. â€œIt’s something that we struggle with. “

Vaccines, he said, are like shark attacks – something we naturally and inexplicably tend to fear more than all the data suggests.

“That will never change,” he said. “And our approach to hesitant people is to walk up to them on the beach and show them the data and tell them you have nothing to fear.”

“No one will take a lack of information or a silence as a positive,” he said.

The tricky part, he said, is that not only do people tend to overestimate the risks, but they also tend to have what’s called omission bias: they’re more afraid of the slim risks of harm if they vaccinate than a much more realistic risk of harm if they do not. This means that it is crucial not only to be transparent about the possibility of a vaccine side effect, but also to frame it against other risks.

In doing so, however, Thomson said public health must also take a page from the anti-vaccine groups and do a better job of getting the messages out where people can actually see them. The VAERS website lists a plethora of warnings regarding the data it contains, but people are more likely to come across a misleading headline on social media regarding the number of serious side effects reported in the database without any context.

â€œWe have to get information in the right format for people,â€ he said.

In Bertha Hidalgo’s case, she found that sharing more in-depth details often helped people be more open to the facts about the virus.

Advocating for masks, she found that she got more buy-in from people when she explained how the virus gets trapped in particles of saliva and mucus, and therefore these particles could also be trapped in the weaving of a mask.

â€œI’ve had so many aha moments from people after sharing information like this,â€ she said.

As Hidalgo embraced the new strategy, a vaccine-hesitant Instagram follower began directing her messages with questions about the virus and the vaccine. Sometimes they shared wrong information with her. Hidalgo would always respond. Eventually his disciple was vaccinated, as was their significant other.