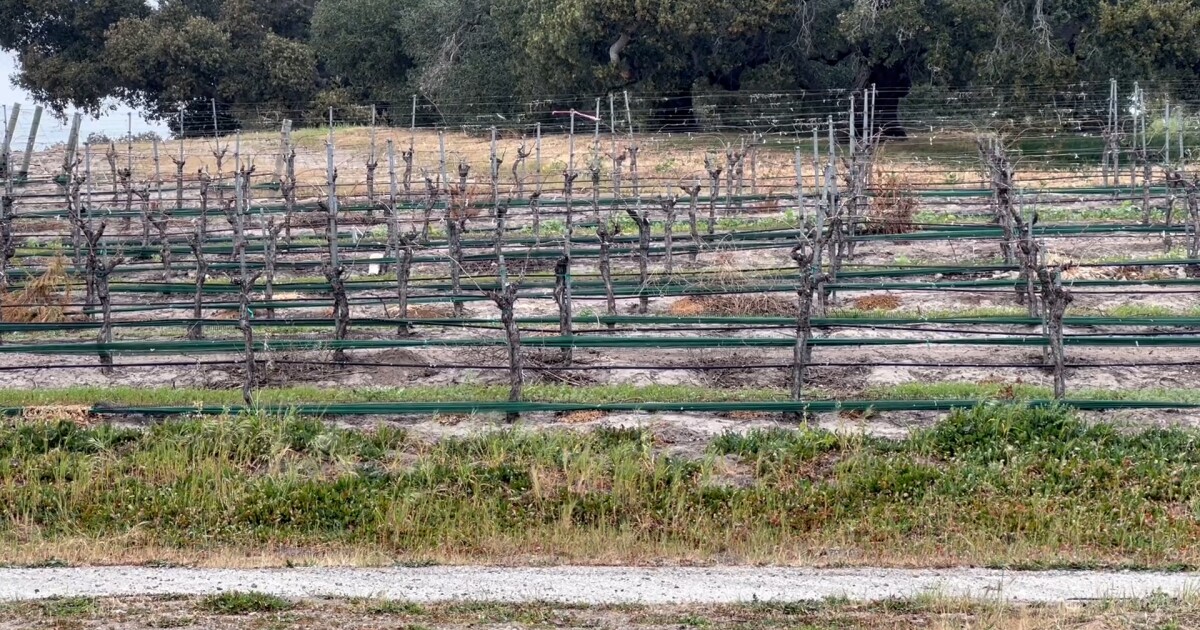 Central Coast wineries, including Pacific Coast Farming, had high hopes that the latest weather system would bring more rain to the region, but it didn’t.

“Some of those buds are now starting to come out of dormancy and they’re starting to grow,” explained Erin Amaral, vineyard manager for Pacific Coast Farming.

“We ended up getting a bit of frost damage on some early shoots. At one point one night we hit 24 degrees in the lower parts of the vineyard,” Amaral said.

The central coast has suffered sharp drops in temperature this week.

“We like to call it ‘weather whiplash.’ We were setting records that stood for over 100 years,” said Dave Hovde, KSBY’s chief meteorologist. “Santa Maria saw 86 degrees, and we’re going to drop 30 degrees by the weekend with highs in the the 50’s.”

The vines are not the only ones to suffer.

“You see more temperature variations in North County [where the] the predominant crop is wine grapes. [In] in southern San Luis Obispo County, you have a lot of high-value vegetables and orchards, so a little frost can have a big economic impact on those farmers,” said Brent Burchett, executive director of the County Office of Agriculture. San Luis Obispo.

The big problem now is the lack of rainfall.

According to the National Integrated Drought Information System, San Luis Obispo County as a whole is facing moderate drought while 7.8% of the region is in severe drought.

“Look, it’s a disappointing system and the reason it’s disappointing is that January and February were the two driest months we’ve ever seen here and now it looks like March could be the third,” said Hovde.

“In these fields you can see that we are already plowing the green vegetation up to every other row of our vineyard. It’s a practice we use to eliminate some of the water competition with the vines,” Amaral said. “We also have many soil moisture monitoring tools.

Organizations such as the San Luis Obispo County Agricultural Bureau are thinking ahead.

“It will be our new normal, so we are looking at things at the county level. We need to invest in water infrastructure,” Burchett said.

Farmers who have suffered losses due to a frost event can contact the San Luis Obispo County Agricultural Bureau to learn more about a program sponsored by the U.S. Department of Agriculture. For more information, Click here.

Looking for an edge in the streaming wars? Look to data storage