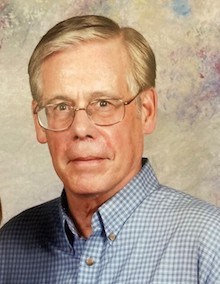 His parents, Carl and Alice Driscoll of Forksville, Pa., Predeceased him; and a nephew, Robert Driscoll.

Wade was born in Carlisle, Pennsylvania, where he started school and then attended Estella’s one-room school for four years. He graduated from Loyalsock Joint High School in 1959 and from Pennsylvania State University in 1963.

Wade was a two-time summer researcher for NASA-ASEE at the Langley Research Center in Virginia. He worked one summer at the NASA-ASEE Ames Research Center. Bell Telephone Laboratories employed him for five years.

Dr. Driscoll began his teaching career at Youngstown State University as an Assistant Professor of Industrial Engineering in 1971, before retiring as Professor Emeritus in 2009.

He has had over 18 journal publications and over 12 professional technical conference presentations.

Among its many honors and awards, ISEGR has selected Wade as an outstanding teacher for several years.

He has been a Senior Fellow of the Institute of Industrial Engineers and has served as Editor, Director, Treasurer, Vice President and Chairman of their newsletter.

He was a fellow of the Institute for Operations Research and Management Science, the American Society of Engineering Educators, and a life member of Mensa.

Among his professional contributions, Wade was part of a three-person team retained to evaluate the performance of a test and an information system for a clinical laboratory, which involved simulation in FORTRAN and GPSS and the use of queue theory.

He also developed an integrated software system to assist in the weekly planning of nearly 1,000 parts on 28 machines.

Among his many consulting duties, he helped engineers at Delphi Packard solve a production sequencing problem, conducted a statistical quality training program for engineering, management and manufacturing, and designed a computer simulation model of a pilot relief valve.

Wade was a devoted and beloved father and grandfather. He coached his son’s baseball and soccer teams and his daughter’s softball team.

All the activities with his grandson Liam gave him great joy.

Rarely believing it was too hot or too cold for outdoor activities, he was an avid tennis and basketball player and runner.

An avid sports fan, Wade rooted more vigorously for the Youngstown State and Penn State teams, with the annual highlight being the Ohio State football game against Penn State.

Following his diagnosis of Parkinson’s disease in 2002, Wade chose to enjoy life, seek new experiences and travel the world. His later life adventures included a group trip to historic World War I sites in Europe.

With his family as grateful traveling companions, he has widely explored England, Ireland, Spain and France.

He sailed to Alaska, Mexico, Nova Scotia and the west to east coasts of the United States through the Panama Canal, with many cold Ohio winters enjoyed from afar in the Florida Keys.

A memorial service will be held on October 2 at 11 a.m. at Westminster Presbyterian Church in Boardman. Call hours will be 10 a.m. to 11 a.m. at the church. Face masks are requested for unvaccinated people and encouraged for all vaccinated participants with safety or health concerns. Davis-Becker Funeral Home is making arrangements.

In lieu of flowers, the family is asking for donations to the Parkinson’s Foundation or the Westminster Presbyterian Church Memorial Fund. The family thank Southern Care Hospice for their care and support.

To send flowers to Wade’s family, visit our flower shop.