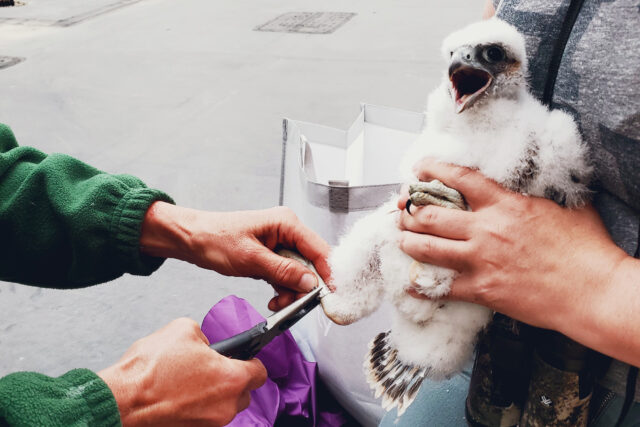 The peregrine falcon chick that was recently hatched in a rooftop nesting box at North Quad has a big wingspan to live up to a new name: Big Flappo Jr. The winning name was selected from dozens of suggestions during the ‘a recent online naming contest after the UM community was invited to participate. The original name Big Flappo, one of UM’s unofficial campus mascots, is a fan-favorite red-tailed hawk whose presence in Ann Arbor over the years has made him a minor celebrity. A campaign was launched on social media at the start of the naming contest by members of the UM community to name the peregrine falcon chick after Big Flappo, resulting in the winning name of Big Flappo Jr. This is the sixth year that the peregrine falcon chick has been named after Big Flappo. the university held an online naming competition for falcon chicks. Big Flappo Jr. hatched in early May and was banded in early June. The rings help the Michigan Department of Natural Resources identify the falcon’s pedigree after it has flown to its new home. The DNR has informed the public that if they encounter the chick on the ground – which happens from time to time when learning to fly – to call 989-313-0283.

UM expands the possibilities of reserving awnings for outdoor activities

The availability of reservations for outdoor awnings around campus has increased. Campus canopies, installed to provide individual students with additional space to study, rest and eat between classes, are available for booking from 8 a.m. to 6 p.m. (for blocks of time up to four hours) Monday through Friday for departmental meetings of the UM and meetings of student organizations. Currently, the last day a reservation will be accepted is August 13th. There are two awnings located at Michigan Union and one at Ingalls Mall North on the Central Campus and one in Gerstacker Grove on the North Campus. For more information on booking an awning and rules for use.

UM faculty, staff and students can now take advantage of new Zoom video conferencing features that support an inclusive campus environment. The features are part of the latest version of Zoom (version 5.7.0), released on June 21. Among the new improvements, members of the UM community now have the ability to display their gender pronouns as part of their display name during meetings. and webinars. Meeting attendees and webinar attendees can now ask the host to turn on live transcription, anonymously, without interrupting the host to request this verbally or via chat. Additionally, hosts and co-hosts can now share a screen in all active breakout rooms during a Zoom meeting. ITS launched UM Zoom as a video conferencing service in March 2020. Zoom posts updates frequently, and additional tips and features are available on the ITS website. To take advantage of these new features and improvements in Zoom, members of the UM community should update their Zoom application to version 5.7.0 or later. This version is currently available for most people with a UM account; features will be available to people with CoreImage devices managed by HITS at a later date.

UM received the President’s Award from Esri, a software company that provides geographic information system mapping and spatial analysis software and services. UM is the first educational institution to receive the award since its inception in 1989. Peter Knoop, Senior Application Programmer / Analyst at LSA Technology Service, accepted the award via a virtual speech on July 12. According to Esri, the President’s Award is “the highest honor given to an organization, annually recognizing an organization that uses data-driven decision making to positively impact the world. Esri recognizes UM” as leader in empowering and supporting his community through the implementation of a large-scale campus-wide GIS â€.

The university’s Human Research Protection Program has received full accreditation from the Association for Accreditation of Human Research Protection Programs, affirming its commitment to protecting participants in human research. The HRPP, coordinated by the Office of the Vice President for Research, is responsible for protecting the rights and well-being of participants in research conducted or reviewed by UM. The university has maintained AAHRPP accreditation since 2008. The AAHRPP is an independent accreditation body that uses a peer-led evaluation and education process to ensure that institutional HRPPs set and maintain standards of protection. stringent for human research participants. The AAHRPP conducted a virtual site tour for MU in March due to the COVID-19 pandemic, and as part of its assessment, its team interviewed several faculty and staff to assess how the teams are practicing. ethical and regulatory protections for human subjects. In granting full accreditation, representatives of the AAHRPP Council noted that the university met all of the AAHRPP evaluation criteria and also demonstrated proper documentation of its self-evaluation activities.

The Stamp Gallery reopens to the public in a limited capacity

Since June 25, the stamp gallery is once again welcoming the public in a limited capacity. Previously, it was only open to holders of a valid M-Card. The gallery will be open from 11 a.m. to 4 p.m. on Tuesdays, Fridays and Saturdays. The first hour of each day is reserved for visitors with an increased risk of serious illness. All visitors are encouraged to reserve time at the Stamps Gallery through Eventbrite prior to arrival, as this will help gallery staff monitor occupancy levels and facilitate a safe and socially distant viewing experience. Walk-in people are welcome, pending capacity limitations. Learn more and book at stamps.umich.edu/stamps-gallery/gallery-covid-19-policies.

– Compiled by Jeff Bleiler and James Iseler, The University Record